Carlton’s pre-season plans have been dealt a significant blow following the news that star defender Sam DochertyÂ has sustained a ruptured ACL that will keep him sidelined for the duration of the 2018 season.

The 24-year-old only recently made his return to training after his off-season break, suffering the injury at a training session with the Blues as they prepare for the new campaign. In just the third day of pre-season training, though, DochertyÂ picked up the injury during a non-contact session which couldÂ now keep him out of action for up to 12 months.Â 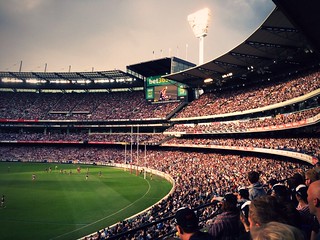 While Docherty is expected to undergo surgery on his knee right away, the All-Australian is now set to be missing for all of next season, handing a sizeable headache to Carlton’s football boss Andrew McKay. The defender’s absence will rob the Blues of one of their stars of last season, someone coming off a career-best campaign in which he earned All-Australian honours for the first time, signing a new contract that will keep him with the Blues until at least 2020. The former Brisbane Lions man, who moved to Carlton in 2013, is now viewed as one of the best mid-sized defenders in the AFL.

Docherty, who won the Blues’ best and fairest in 2016, finishing second behind Marc Murphy last season. Averaging more marks and kicks than anyone in the league, Docherty’sÂ standing is also highlighted by the fact he also ranks second in the league for average metres gained.

For a Carlton team priced at around +8000Â with the latest AFLÂ odds, losing one of their few genuine elite players certainly won’t help the Blues hopes of finishing in the top eight and reaching the finals. While Docherty’s misfortune will potentially give some of the younger members of this squad a chance, losing such an integral member of the team is a tough break for the Blues at this point of pre-season.Â

Having failed to reach the finals for four years in a row, Carlton’s hopes of a top-eight finish don’t appear to be much better this year – and that certainly hasn’t improved following the news that the Blues won’t have DochertyÂ for the entire 2018 campaign. Despite being only 24, the defender is already viewed as a leader in this Carlton team, especially at the back, and it won’t only be on the pitch where the Blues will miss Docherty, and his absence leaves a significant hole in this team.Â

In a bid to strengthen this Carlton roster, the club have brought in three players for pre-season training. Former Gold Coast wingman Matt Shaw, ex-Port Adelaide defender Cameron O’Shea and delistedÂ Carlton midfielder Blaine BoekhorstÂ will all now have the chance to impress before the upcoming draft, with the Blues taking a closer look at the trio. While Shaw and BoekhorstÂ were released by their clubs at the end of last season, O’Shea is hoping to earn a deal with Carlton after spending last season playing for the club’s VFL affiliate Northern Blues.Â