Best of the 2009 preseason training photos

Where would our offseason be without the hardcore fans who rock up at ungodly hours of the morning to windswept, sleet-driven suburban footy grounds to see their boys work off the holiday kilos? We’d be a lot less informed, that’s where. Plenty of these hardy souls also take along their digital cameras, so let’s look through the galleries for the most revealing snapshots.

We’ll start with the picture that has caused a bit of furore already, with radio 5AA in Adelaide talking about it a week ago. Graham Johncock was caught at just the wrong angle with his breath in, leading to this unkind shot.

Lest I be accused of picking on the Crows – their fans are arguably the most fastidious when it comes to covering training, with some even taping the sessions to upload to YouTube – I was most impressed by this shot of Brent Reilly, which showed off his muscle tone at just the right moment. Now then, just to get the taste of Christmas ham right out of our mouths, let’s go to the other extreme and look at a kid who needs about ten turkeys shoved down his gob to bulk him up. I speak of Christian Bock, who was rookied by the Bombers this year, and could do with about four years in the gym sucking protein shakes.

No seriously, I’m not picking on him! I’m sure he’ll be a fine player if his legs don’t snap like twigs. He’s obviously from the Damien Peverill School Of Eyebrow Grooming. Hmm, maybe I am picking on him.

Let’s move onto something more positive down at Windy Hill, which is Scott Gumbleton. This picture shows pretty starkly the difference in height between Gumby at 197cm on the right and Scott Lucas at 192cm on the left. According to the last figures, Lucas still has Gumby covered in weight by 6 kilos, 96kg to 90, though is that a teensy bit of flab I see on Lucas’ left bicep? Nah, must be a trick of the light.

As a point of reference, here’s Lucas and the fourth pillar in the freshly built Gumby’s Box, Jay Neagle.

Hmm, these pics are starting to look like those old ones of the ape evolving into man. Let’s move over to the Lexus Centre, where Alan Didak seems to have lost no fitness after his early finish to the 2008 season. Over at Punt Road there have been plenty of cameras whirring away, not just by fans. Here’s a pic featuring a player I’d like to know more about, if only to find out why you coaches out there seem to like him so much. That’s Alex Rance second from left in this photo, who despite my repeated attacks on his character still remains stubbornly popular in plan teams, albeit at a reduced level of picks. Okay, so I can see the boyish good looks, but he’s not a bagful of walnuts, now is he? From left it’s Cleve Hughes, Rance, Shane Edwards, David Gourdis and Dean Putt. 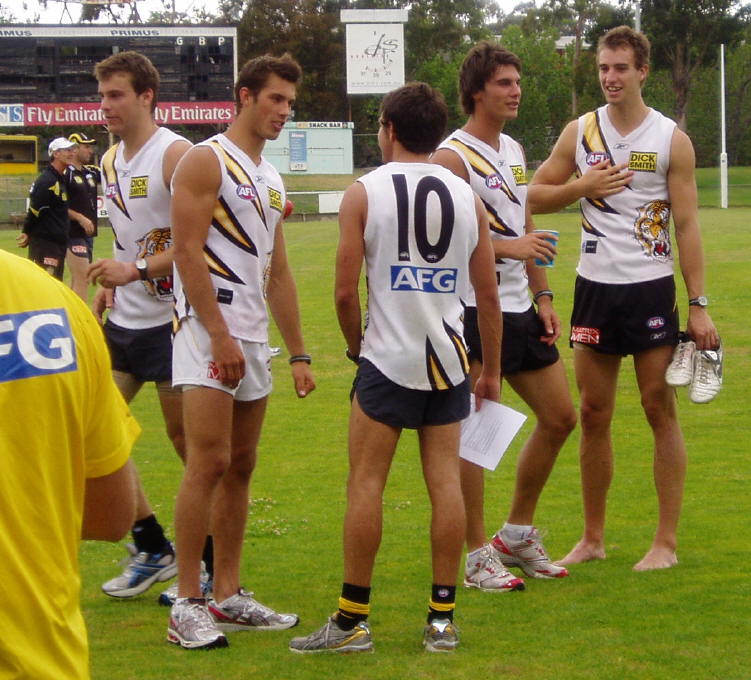 Speaking of good looks, I like the amount of muscle definition that the Tigers kids are showing at this early stage. This shot shows Daniel Jackson leading home Brett Deledio and Jarrad Oakley-Nicholls in a sprint. Not a bit of flab on any of those biceps. 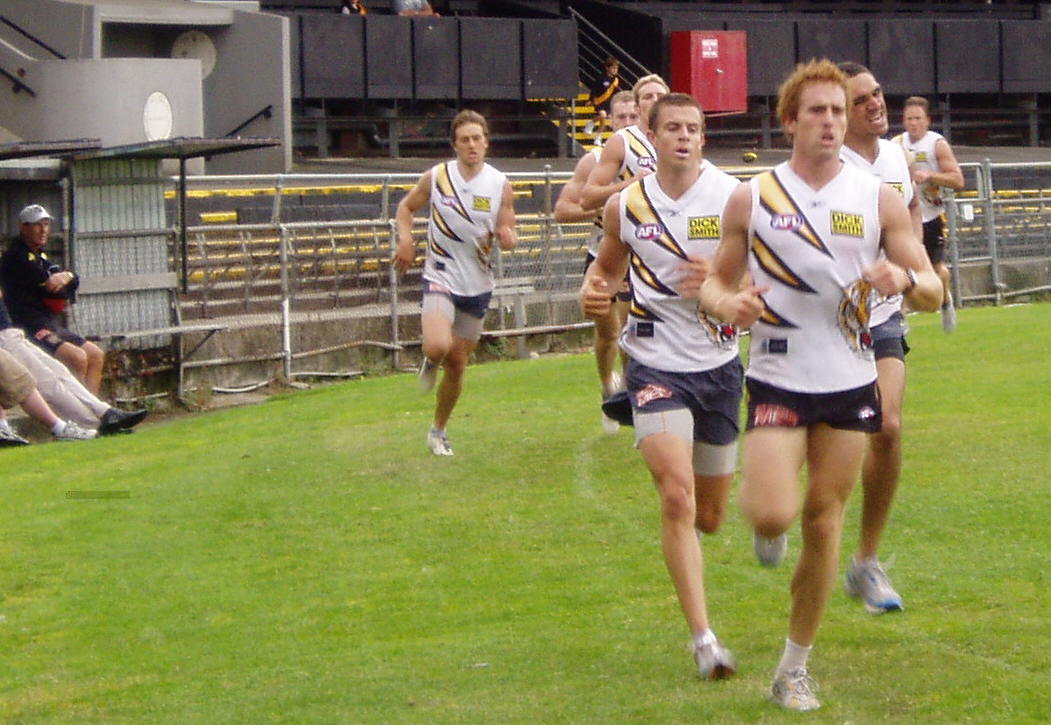 If you think that’s okay, Port Adelaide will go you one better. Chad Cornes may have been struggling slightly after multiple off-season surgeries, but that time off his feet has obviously been spent in the weight room as this shot shows.

This Cameron Falloon bloke that they’re all raving about down at Port is having an obvious effect as the new fitness coach. Here’s Danyle Pearce, who has never been this buff.

And here’s the one all you fantasy coaches want to see, apparently: Travis Boak.

At this rate we may be talking in three months’ time about the Falloon Balloon, as somehow he seems to have got a bike pump connected somewhere on these blokes and pumped their muscles up, Popeye-style. Must be some good spinach down there.

For fantasy coaches who are spending their preseason combing reams of statistics, it’s always refreshing to sit back and just look at how some players have progressed physically. If you’ve seen some particularly good training photos posted by fans, let me know in the comments.