The AFL has released its opening set of fixtures ahead of the 2017 campaign,Â with the most notable game of the regular season coming between Gold Coast and Port Adelaide in Round 8. On May 14, the two teams will participate in the AFL’s first ever league game to take place in China. The Power have been huge supporters of the AFL hosting games outside Australia, in particular in China, and the club will now take on the Suns in a historic fixture held in Shanghai’s Jiangwan Stadium.Â 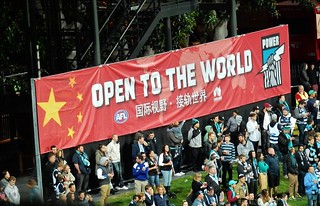 “Port Adelaide FC Reaches Out to China“Â (CC BY-SA 2.0)Â byÂ mikecogh
Â
While this will be the first game played in China in which league points are at stake, this won’t be the first time this stadium – which is now used as a golf driving range – has hosted two AFL teams. In 2010, Melbourne and Brisbane competed in an exhibition match, with the venue capable of holding 15,000 spectators after work is done to adapt it to Aussie Rules, with new turf laid and the playing surface changed from it’s current rectangular shape.Â

In a similar way to how St KildaÂ took one of their home games overÂ to New Zealand between 2013/15 – something the club hope to continue – the Power are looking to grow their presence in Asia by hosting one of their Home games each season in China. Port Adelaide will have full home team rights on their trip to Shanghai this season, wearing their home colours, although theyÂ will still play 11 games at the Adelaide Oval having purchased a home fixture from Gold Coast. Following a tough couple of seasons, Port Adelaide and their fans will be determined this year bringsÂ them more than just a nice tripÂ to Shanghai.Â

The Power, who are expected to start the new campaign with betting odds of around 8/5 to secure a top-8 finish, will be hoping to be heading to China coming off the back of a strong start to the season. It will be a similar story for the Essendon Bombers, who will welcome back the group of banned players set to return to action after their 12-month suspensions for doping offences for their Round One clash against a strong Hawthorn Hawks team at the MCG. In a game that couldÂ give us an indication as to what we can expect from the Bombers in 2017, Essendon coach John Worsfold will be under pressure to show what he can do now heÂ finally hasÂ a full deck of cards to play with.Â 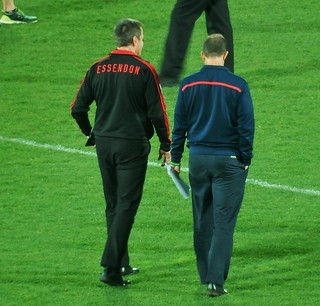 Without the likes of Jobe Watson, Dyson Heppell, Cale Hooker and Michael Hurley, the Bombers endured a dismal 2016 campaign, winning just three games after being forced to patch together a squad following the suspension of 16 players, 10 of which are now preparing to return to the Essendon team. While the Bombers are expected to need at least a season to get back to where they were before last year, that can’t be said of AFL big boys Carlton and Richmond, who will get the season underway at the MCG on March 23, followed a day later by Collingwood playing host to defending premiers the Western Bulldogs.Â

Catch up awesome discounts of top brands with Bargains ! You will come across catalogues , product informations and reviews when you check Bargains . Here you go !