Hawthorn Hawks fans have breathed a sigh of relief following confirmation that head coach Alastair Clarkson has committed himself to the club by agreeing a new contract until 2019. In the run-up to the defending AFL champions’ victory over Adelaide, Hawthorn’s chief executive Stuart Fox revealed that the four-time premiership-winning coach had put pen to paper on a new contract. While the club had always been relatively confident about keeping their coach at the MCG, the lack of progress had left some doubt as to whether or not other AFL teams could start approaching the 47-year old.

Clarkson has been in charge for almost 300 games since 2005 and is expected to replace John Kennedy as the club’s record holder. During his 11 years with the Hawks, Clarkson has led the team to four premiership wins, playing a huge role in Hawthorn establishing themselves as AFL’s dominant force. Coming off the back of theirÂ third straight title, the Hawks had been desperate to sort this issue out before the season began. While that didn’t happen, this squad now know for sure that their coach isn’t going anywhere.

With his new deal, which is worth a reported $1 million a season, Clarkson is able to put his full focus on winning a fifth title as head coach. Having put together an encouraging start to the year, winning four of five games, the Hawks at the time of writing haveÂ odds of 3/1 to win the Grand FinalÂ for a fourth straight season. The promising first few weeks of the campaign in terms of results haven’t been reflected in their performances and at the moment we’ve seen a Hawthorn team outplayed on a number of occasions this season. While the results have been going the Hawks’ way, the way in which the club have started 2016 has given encouragement to their title rivals. 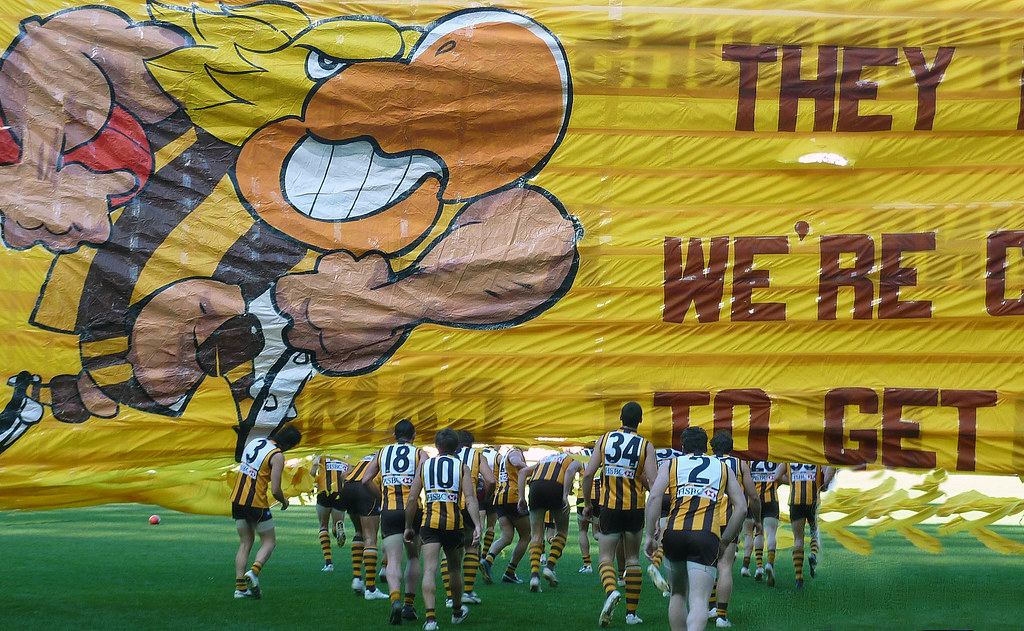 “Hawks Banner run through“Â (CC BY-ND 2.0)Â byÂ Â delbzÂ
Â
A number of teams not expected to be contenders this season find themselves near the top of the ladder. Take North Melbourne, for example, who are currently riding aÂ five-game winning streakÂ that has put them top of the AFL tree and right in the title discussion. While the Hawks will still be confident of beating any other team in the league, we’re still yet to see whether or not they can keep racking up wins while not performing at their best. Clarkson might not be able to get out on the field, but his future now being sorted may be the catalyst to the team hitting their stride.Â

One thing is for certain, though, the mystique and aura that has surrounded this club for the past five years is no longer there. Other clubs can see that the gap between themselves and the Hawks has been cut considerably over the summer and Hawthorn will know they will have to put in a huge effort to maintain their place at theÂ top of the AFL tree. Clarkson might well be continuing in his role with the club, but the job over the next three years could be a bit different to the last three.