Dan Houston: Sore in the left shoulder after a bump by Fogarty in Q3... subbed off... 19 touches and 3 marks plus 2 tackles
Lachlan Murphy: Right leg twisted nastily under him in Q1 and did not return... 2 touches
Ned McHenry: Slam tackle by Lycett in Q1 saw his head hit the turf and he was in Koosbane... subbed off
Aiden Bonar: Ankle injury midway through the third term... Responsible for De Goey... 10 disposals including 8 kicks... also 2 marks and 2 tackles
Nathan Murphy: Knocked out midway through the third term... Rebounding off half back... 2 marks and 13 disposals
Jordan Roughead: Injury in the fourth term... 8 possessions including 6 handballs
Touk Miller: Hamstring soreness had him finished late in the fourth... 33 disposals and 7 marks with 3 tackles
Nick Holman: 14 possessions and 6 marks plus 6 tackles... 1.0 as well
Jake Stringer: Right hamstring iced up in Q3 and subbed off... 0.2 from 5 possessions and 2 marks plus 2 tackles
Shane Edwards: Left ankle rolled in a tackle in Q4 and subbed off... 19 possessions and 5 tackles
Sam Simpson: Subbed off at HT with a lower body injury... 0.1 from 12 disposals and 2 marks with 2 tackles

Tom Papley: Back soreness very early in the first... 1.3 from 17 disposals and 5 marks with 3 tackles
Riley Thilthorpe: Right knee knock in Q3... 2.0 from 6 possessions and 3 marks
Christian Petracca: Head to head with Mills... Received a corky very late in Q4... 1.1 from 28 possessions and 8 tackles... not helped by 5 FA
Jack Ziebell: Shoulder soreness early in the fourth term... 30 touches and 7 marks
Devon Smith: Knock to his already-strapped left arm under a Taranto tackle in Q2... 14 possessions and 3 marks plus 3 tackles
Luke Dahlhaus: Copped a knock in the torso by Graham in Q2 and looked sore... 7 touches including 5 handballs... also 3 tackles 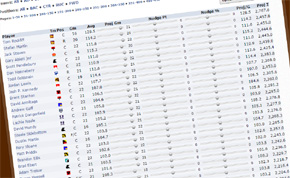